“OVER THERE: Comedy Is His Best Weapon” illustrates the hardship and hilarity of PJ Walsh’s journey – In 1990, convinced there’s no chance of war, a screw-up enlists. A stint as President Clinton’s Dental Technician, a career in stand-up and three wars later, he faces mortality in the belly of a C-130 plane flying over Afghanistan. 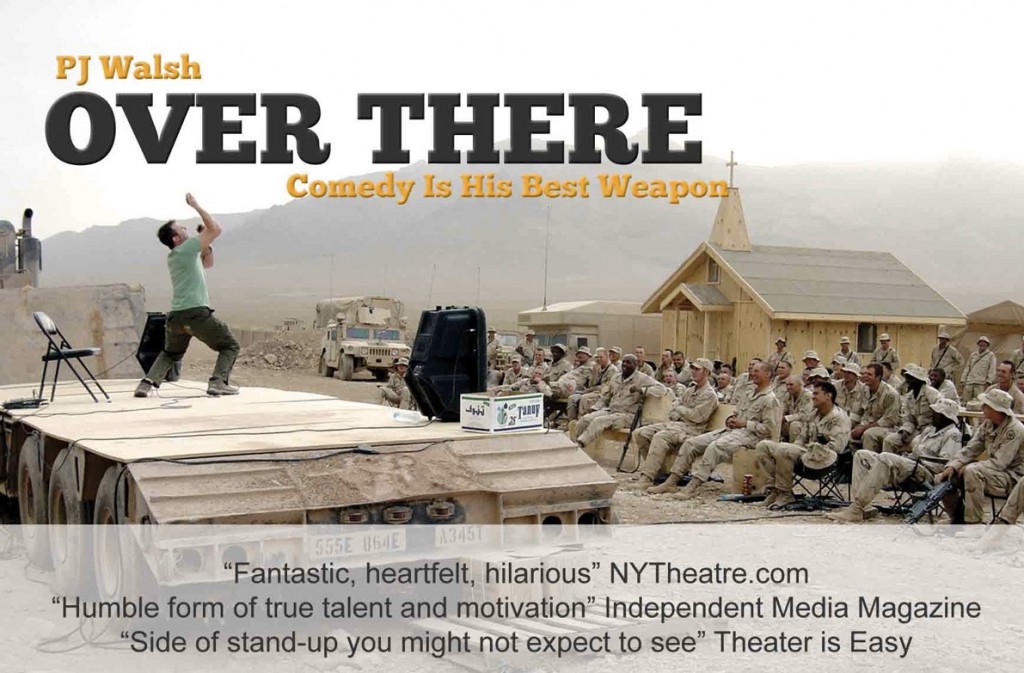 When I started working on a “solo” show I was not really sure where I was heading. I had been told for years that I needed to write a book because I have so many unique experiences with very recognizable individuals. Stand-up comedy will always be my first love. It is how I define myself when someone asks, but the experiences over the past few years have had me feeling that I might have experienced more in my life then just jokes.

The process of putting this show together really became an exploration of a life. Because of my love for comedy, I wanted to infuse my sense of humor into a serious narrative that would make audiences walk away laughing but go to sleep thinking. This show features tales from my life, but its purpose is so much bigger than me as an individual. My hope is to continue with this “Over There” movement in a fashion that will benefit those who truly deserve every ounce of our compassion, empathy and support.

Thank you for taking a moment to join me here at the “Over There” movement. This may be a one-man show, but I’m working hard to do important things to improve countless lives.

Hilarious show by a current stand-up comedian and former member of the U.S. Navy that goes much deeper than you’d expect… Walsh plays all of these characters from his life with such skill that they really pop off the stage… I highly recommend this show. It’ll make you laugh, think, and leave with a glimpse to a side of stand-up you might not expect to see.
Ben Charles, Theater is Easy (theasy.com)

Thankfully, I got to see this fantastic, heartfelt, hilarious one-freckled-man show… Instead of just a guffaw, OVER THERE offers a thought-provoking, side-splitting journey through PJ Walsh’s not so ordinary life… just when you’re thinking you can laugh no more, he hits you in the stomach with raw emotion and you realize his comic agenda is not just about him but to help and support others as well. I’ve already told my friends to go see this show and now I’m telling you.
Maura Kelley, (nytheatre.com)

The one-hour comedy show is a fusion of Walsh’s quick wit and insightful observations about life as a soldier and civilian… The poignant narrative intertwines the solemnity of war with the humor of Walsh’s inner thoughts. “Over There — Comedy Is His Best Weapon” demonstrates Walsh’s keen eye to see comedy in the ebb and flow of every day events while tackling larger issues such as war and growing up.
Brian Willett, (bloginity.com)

In “Over There: Comedy Is His Best Weapon,” the Queens-based writer and standup comic relates his personal journey through three wars — as an enlistee and as part of Comics on Duty — and through being President Clinton’s dental technician. “He could floss more and use a fluoride rinse,” says Walsh, “like most people.
Joe Dziemianowicz, The Daily News

If you’re looking for laughs in the humble form of true talent and motivation, then check out PJ Walsh. You’ll laugh. You’ll cry. You’ll leave ready to conquer the world, or at least a small part of it.
Sheena Vega, Independent Media Magazine (indiemediamag.com)

“When it came time to leave the Navy and say good-bye to his patients at the White House, Walsh confessed to President Clinton that his goal was to become a comedian. Since then, his dream has resoundingly come true” George Heymont: My Cultural Landscape/ The Huffington Post