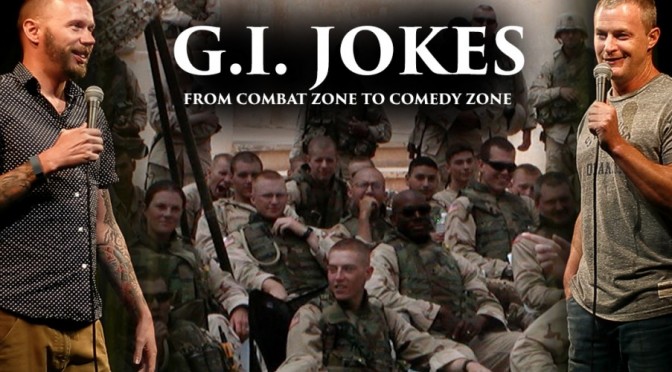 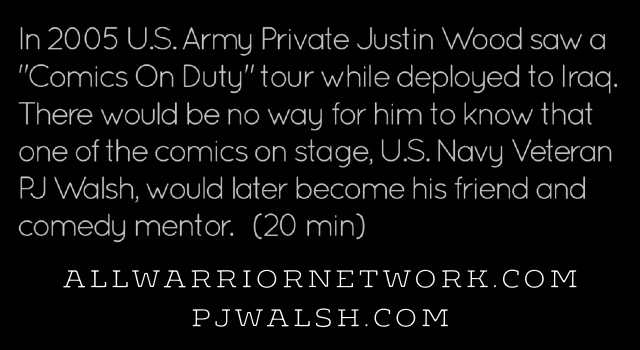 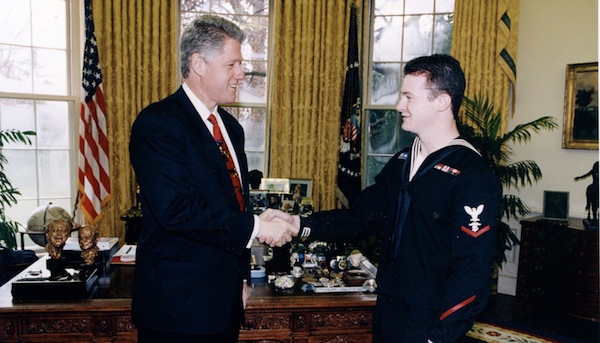 My military service is very far in my rear view mirror. I know my story and, more importantly, what it means to me. Since my time in the service, I’ve heard, befriended and in a small fashion been a part of many other veteran’s stories. Men and women who have sacrificed a great deal more while in uniform then I can even imagine, but all experiences I know are reality.

I owe so much to this group of people and I’m lucky to maintain a connection to them. My personal cost did not add up to much and I’m fully aware of how fortunate that is. It’s part of why I never feel any need to be thanked – my time in the military was really good to and for me.

Saying “thank you” feels more right to me. Thank you to all those who have had so much taken from them while serving under the very same colors as I did. I live my life for you and I will continue to do the best I can.

…from one of the lucky ones

Jhony Wonder my old friend, Navy shipmate & brother in making sure people have smiles. You had to call me out! SOB! OK… Damn! Since you called me out! There are so many variables that lead up to these instances. Weapon access, mental illness, drugs, political views, economy, isolation, laws… I mean it’s like the old pictures/movie of telephone operators with a billion plugs and lines in front of them.

I will just say this coming from someone who has not been directly affected… I worked in the White House and Camp David when Oklahoma City bombing occurred. I witnessed 1st hand the shutting down of Pennsylvania Ave (since) as a result of that horrible act. I watched the way security changed as a result… it got much much tighter. You were Yankee White (very high) clearance or vetted to get on the grounds. Before that I think you could have walked up and said “I’d like to see the President,” and got in.

While I was there a guy got off 29 shots at the White House in October 1994 from Penn Ave w/ an SKS. A man also crashed a plane into the White House that same year… they said it was a dramatic suicide and he had a history of alcohol and drug problems, I was also there when they shot and killed a homeless man brandishing a knife, and then when a guy scaled the W.H. fence w/a 38 revolver (who studied for a doctorate in psychology) and was shot in the arm and the bullet bounce off his bone hitting a secret service agent. These all took place in the couple years I was at The White House.

I also worked security at The Holocaust museum at the same time. No metal detectors were in place when I was there. A month did not go by without some B.S. going down. I had to pretty much drag a disrespectful skinhead out of the reflecting room with some guys once… then in 2009 a museum police officer was shot and killed at the Holocaust museum.

I also grew up very close to Newtown, CT. I was glued to the news and my Facebook wall every moment of that day. It affected my community directly. Teachers left the school my mother worked in to see if their kids attending Newtown where ok, I read posts on my Facebook wall between friends updating how families I know were, my sister saw old schoolmates of ours on TV… fortunately no friends of mine lost anyone. But… I wrestled Newtown kids as a kid myself; I dated a girl from there… I went to the movie theatre there.

I go into movie theaters almost weekly. Shootings took place there as well now… they also took place in Post offices, Fast Food restaurants, hair salons, beer distributers…. stabbings occurred in parks (a lot in my home of NY growing up), parking lots… they found a bomb in my hometown local mall sometime in the mid 90’s and brought it to a airport runway and it f*cking blew up! The Olympics in Atlanta (Which at the time I was going to work at but my girlfriend insisted I stay in NY because she had a very bad feeling… she begged me. True story… that gal broke my heart but might have saved my life).

These are just horrible occurrences that come to mind that I felt close to in a way… myself directly have been very fortunate. Although over the years I have directly seen and feel the results of every war that has taken place since I’ve been on this earth. That is another conversation.

When I was a child I remember a little boy who went missing in Florida named “Adam Walsh“… my last name is Walsh… I never had a brother and his father looked just like mine. I as a kid watched what story unfold everyday… he was found dead. There was no happy ending. A kid who looked like me, same last name was gone… no reason really… just evil. His father went on obviously to do amazing things. I think… since you asked.

I think that’s the very best thing we can do. Go on to try and to get/do things better in our own yard. With our kids, friends and communities. Politics always comes down to money… make no mistake about that. It’s always about the dollar! My father taught me that! But on the level we function. We shake each other’s hands, give a needed hug, lend an ear. This stuff has always been happening. Bad people will always exist.

Presently we have a billion times more communication, voices and vocal opinions. The media has never been responsible. The phrase “If it bleeds it leads” was not created recently. Now we have 24 hour news channels competing with each other, newspapers competing with online bloggers, bloggers, Vines, Facebook updates, tweets… which EVERYONE can access and EVERYONE can put an opinion into motion, sensationalize and find enough people out there to agree with them.

I am a comedian… I always say, “If I can get just 1% of this country to be a fan of me… I would be set for life” Just 1%! I have performed in every venue imaginable… coffee house, youth hostels, comedy clubs, theaters, arenas, flat beds in war zones … even on stage in Iraq with incoming… in the back of my mind I have this voice saying… “Progression”… it’s only a matter of time until a gun, bomb or knife enters a comedy club or venue… because post offices, fast food joints, movie theaters, schools, malls and work places have been done.

Evil has always been here and evil will always progress! Like we do. When you watch the news, read Internet posts and take in the way things are covered now. You would think this is how it is. We can’t go to work, movies, and school… It’s not. I travel the world constantly! The good towers over the bad… I SEE IT ALMOST EVERY DAY! It’s not as sexy, eye catching and appealing to talk, write or cover. Think of the numbers of years, people and places and how many instances that have occurred. We are so much better then we are not. These are horrible tragedies and we should absolutely bust our ass’s to prevent them. But they are tiny in comparison to how people truly function.

But like anything… we can always do better. So I’m going to make people laugh, be a good brother, son, uncle and a decent reliable friend to everyone while I am here. I will continue to try getting more recognition and assistance for our veterans and mostly appreciate every day and person in my world. I don’t always… days like Monday at The Washington Navy Yard remind me to. I wish they didn’t and never happen. But they do and will… So being the best me is all I can control. Maybe that will have a positive effect. I am also fully aware that my outlook could drastically change if such senseless tragedy directly impacts me. It’s our experience’s that shape us.

I will never pretend to know how I would deal with such pain. Much luv… Peej